Goblin Panda (also known as Hellsing, Cycledek, and likely other names due to non-standardized naming conventions in security) is a group has been active for the better part of the last decade, and has historically had information theft and espionage related motives that align with Chinese interests. Their targets have primarily been defense, energy, and government organizations located in South/Southeast Asia, with emphasis on Vietnamese targeting. Within this analysis I review artifacts that exhibit behavior consistent with past Newcore RAT samples, which have been attributed to the GoblinPanda APT group.

While reviewing suspected dropper files, I came across an interesting document titled “Bao Cao Su Kien Dong Tam.doc”, which translates to “Report the Dong Tam event” in Vietnamese. This document was created on 01-10-2020 at 08:31:00, and purported to contain information about a recent controversy regarding land disputes between the Vietnamese government and the locals of Dong Tam (a rural commune located in Hanoi, Vietnam). While this is not the first time tensions were high between Dong Tam locals and the Vietnamese government, the timing of the most recent events and the document creation date is quite suspect, with the most recent dispute occurring on 01-09-2020 - the day prior to the document creation. 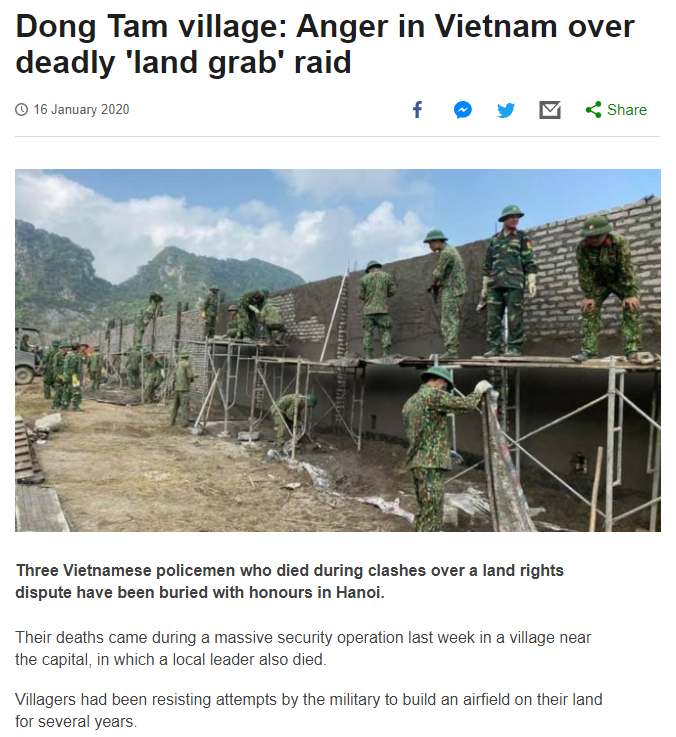 Upon opening the document, CVE-2017-11882 is silently executed in the background. CVE-2017-11882, which was patched by Microsoft in November of 2017, is a memory corruption vulnerability which grants the attacker RCE (remote code execution) upon the user opening a specially crafted file (see here for the Microsoft advisory). 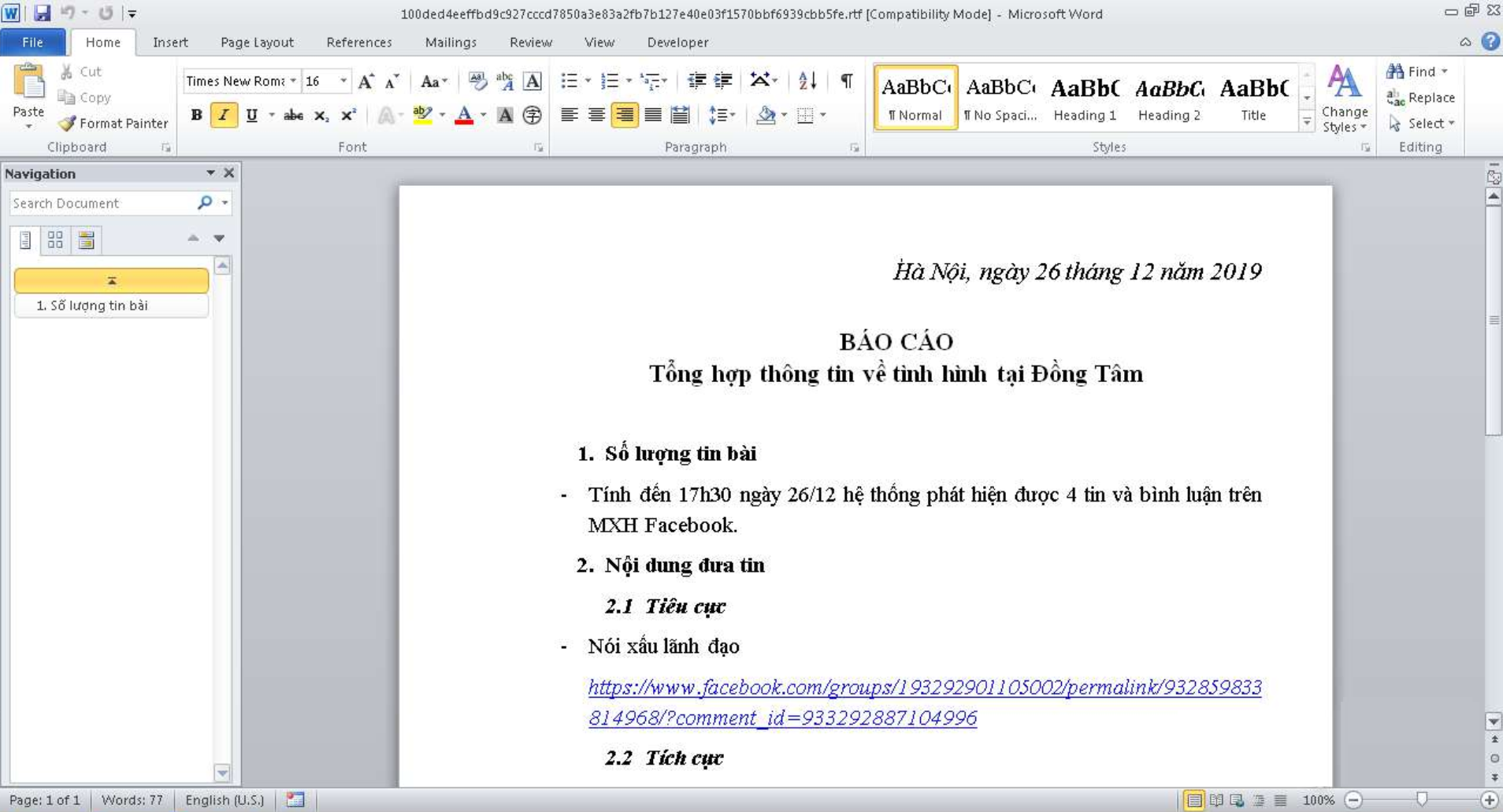 Following exploitation, an embedded object “wd32PrvSE.wmf” is dropped to the user’s local temp directory, and subsequently executed. Wd32PrvSE.wmf then drops three files to the user’s local temp directory - QcConsole.exe, QcLite.dll, and stdole.tlb. While QcConsole.exe appears to be a valid and signed file belonging to McAfee, Inc. the other two dropped files (QcLite.dll and stdole.tlb) have less than benevolent intentions.

QcConsole.exe is then executed, and loads QcLite.dll. QcLite.dll will then establish persistence via an autorun registry key named “Windows HD Audio Manager”, drop a file titled “desktop.ini” to the C:\ProgramData\ directory containing obfuscated data, and load the contents of stdole.tlb to memory, and decrypt it, resulting in executable data.

Dllhst3g.exe, a legitimate Windows binary, is then started in a suspended state, injected with the executable data extracted from stdole.tlb, and is subsequently resumed. The compromised dllhst3g.exe then decodes the contents of the previously dropped “desktop.ini” file, which directs it to the location of QcConsol.exe, and QcConsol.exe is executed for a second time. 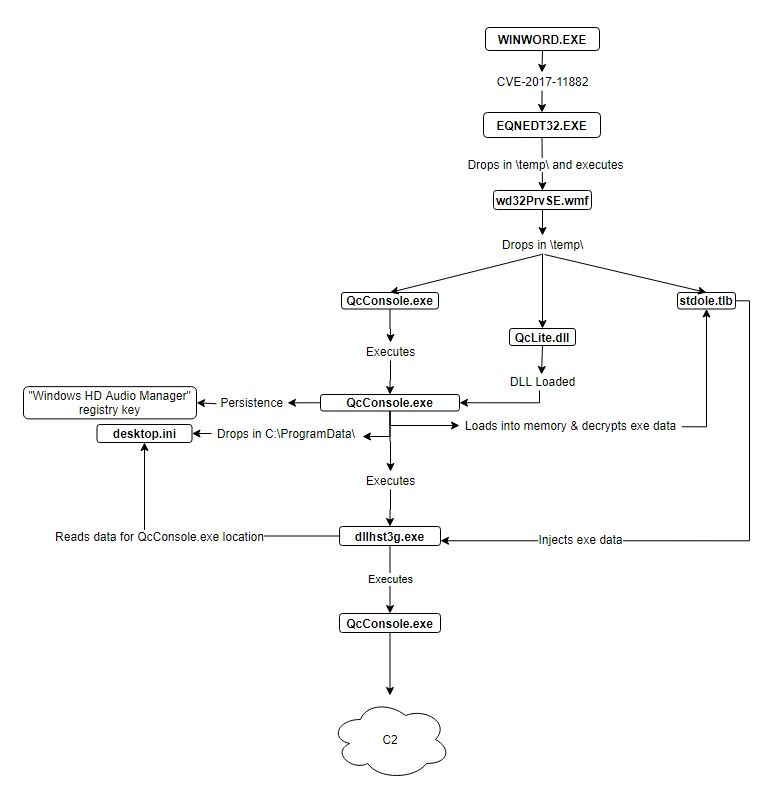 Command & Control communications are then initiated via the secondary QcConsol.exe process to the URLs “hxxp://club[.]baclieuvn[.]com:8080/link?url=maOVmKGmMDU1&enpl=OXco&encd=XARIZTE=” and “hxxp://club[.]baclieuvn[.]com/link?url=maOVmKGmMDU1&enpl=OXco&encd=XARIZTE=”. While this domain currently resolves to the Singapore IP Address 103.253.25[.]15, none of the C2 requests received a response. This may be due to the infrastructure being burnt or specific geolocation requirements.

Although I was unable to obtain additional C2 communications, the activity observed in relation to the dropped artifacts is very reminiscent of Newcore Remote Access Trojan. Furthermore, the targeted nature of the weaponized document, in addition to the apparent targeting of Vietnamese individuals, is quite suspect. While this isn’t conclusive evidence that Goblin Panda is responsible for this sample, the similarities between it and other confirmed Newcore RAT samples, in addition to the fact that Vietnam has historically been targeted by Goblin Panda, is telling.